We arrived just after dark, and it was pouring when we left, so we weren’t able to get any pictures.  However, we did stop at this park last April on our way to a powder coating class.  I’ve posted a picture from that trip to give you an idea of the park.

We’re a little more waterfront than I was anticipating!  We just heard that the Little Pigeon River is at it’s highest level in 15 years and the 5th highest level ever.  We did get a pretty sunset though.

We went to Gatlinburg with plans to ride the Aeriel Tramway at Ober Gatlinburg.however, there were so many people that we couldn’t get a parking spot for the White Whale.  We decided to go to Gatlinburg’s Arts and Crafts Community instead.  We found a shop called “Christmas Eve Gift” which had a variety of handmade gifts, including a bunch of different types of hand painted glass blocks.  We picked out one we thought would help keep the Christmas spirit going.  Riley spent the evening admiring it.

We also found a wonderful photographer, William Britten and bought his “Morning Majesty” framed photo to help add some color to Tudee’s walls. 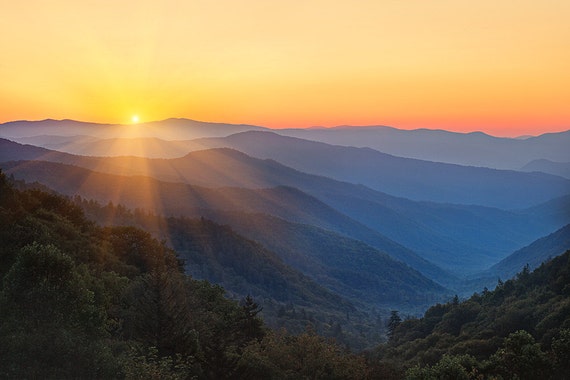 Before we left the campground, we saw some people looking through a telescope and noticed a sign under it that indicated it was to view a bald eagle.  We took a look and sure enough, high in a tree overlooking the Little Pigeon River sat a bald eagle surveying all beneath him.  I tried to zoom in with my camera to get some pictures.  (S)he was a little far up but you can tell it is a bald eagle.

Oh, and the river has receded quite a bit from when we first arrived.

We hit our first issue when we arrived at this campground.  First, it was really tight getting in to the “loop” for the campsite we were assigned, as well as the actual site.  The worst part was that the site not only sloped down hill it also sloped to one side. And while the site was paved, the pavement was all cracked and heaved. Tudee’s auto leveling did succeed in getting us level but when we looked at the end result, we noticed both wheels on the bedroom slide side were off the ground at least 6″.  The rear jack was fully extended and the middle jack was leaning.  We were too nervous to put the slides out and after weighing our options to see if there was a better way to situate the trailer, we decided we needed to return to the office and ask for a different site.

They gave us a new site, however, the rain has soaked Georgia also and the site is nothing but a swamp.  By this time it is dark so we decided to set up camp.  We were so excited to get the trailer in and leveled but our hearts sank again when we looked at the result and noticed that the wheels were once again off the ground, just not as bad.  Unlike the last site, we had a few leveling blocks left over and Mark decided that we would be safe to just put some blocks under the tires.

Stone Mountain has a big winter fest going on during the Christmas season.  It should be fun visiting the lights and fireworks, especially on New Years Eve.  They have an aerial tram ride to the top of the mountain here also, so hopefully we’ll finally get a ride in, if the rain holds off 🙂

We were in a dense fog warning last night and this morning.  When we woke up this morning you couldn’t see much of anything.  The fog finally did clear around 3 and we were surprised by what had been right in front of us but we had been unable to see.  A before and after below.

As the fog was lifting, we decided to get in line for the sky ride to the top of the mountain.  We were only in line about 5 minutes when they announced they were closing the ride due to high winds.  So strike two in being able to ride an aerial/sky lift.  We did take the train which takes you around the mountain and got us up close to the carving in the side of the granite.  Mark read that the thumb on Jefferson Davis’ hand is as big as a sofa and you can park three buses end to end on the back of one of the horses.

We headed back to the trailer to fix some dinner and arrived back just in time to watch the sunset.  Our site is right next to the dock and there was a little boy down there fishing.

After dinner, we headed back to the attractions to see the lights and fireworks. Happy New Year everyone!

We stopped for the night just south of the GA / FL boarder in White Springs, FL.  We stayed at small, family owned park.  It was very quiet and seemed like most of the people there were more long term residents.

We finally made it to the destination that would be the furthest south we would go.  We spent three days here visiting my parents who are staying at a Wildlife Management Reserve in Punta Gorda.  We also got to spend a day with my 93 year old Aunt Ruth.  The RV park we were in was a very large campground where most people stay for the winter season.  We had a nice spot right next to some water.  At first we thought the water fountain was a nice benefit, however, that quickly wore out its welcome as the nights wore on and it seemed like we were sleeping with someone constantly showering next door.  Mark found where the water control was and was tempted to go turn it off so he could get a good nights sleep!  Riley was not too happy with us taking him away from the nice cool (cold) days and nights of home to the 84 degree heat of FL.

The last night we met up with my former boss and her husband and had a nice dinner together.

Mark’s sister told us that their Aunt Ellen and Uncle Victor lived in Ocala, FL and she believed they are also buried there.  Unfortunately, we didn’t get to see much of the area as we arrived later than anticipated due to several accidents on interstate 75N.  The last 72 miles of the trip was nothing but stop and go.  We arrived with just enough time to unhook and make it to church.

I did grab a couple of pictures are we were pulling out.  The first is the site we were parked at.  The second is of a tree filled with Spanish moss.

While the park in Arcadia was nice and had lots of amenities, we’ve determined that we definitely prefer staying in state parks.

We think this is our favorite spot so far!  The camp site is very large and we have some views of the water.  The weather is cooler, which Riley is happy about.

I picked this campground because it is close to Cumberland Island National Seashore, which we hope to go see tomorrow.

Turns out the only way to get to Cumberland Island is via a ferry run by the National Park Service.  Trips to and from the island are limited during the off season, which would have left Riley alone for too long, so we decided to stay in the park and take a hike with Riley.

Before Christmas, I bought a sticker map of the United States so we could fill in the states we visit in our RV.  Before we left, we made a board to stick the stickers to.  Tomorrow we will stop in the last new state for this trip, South Carolina.

Did I say the last stop was our favorite?  Hummm, did I say favorite up to that point?  While Huntington Beach is right on the ocean, there is a dune between the camping sites and the ocean so we don’t have an ocean view from the camper.

But, a few steps over the dune and what a beautiful site!

We figured out today that it’s been almost 8 years since we’ve been to the beach.  While the weather was beautiful today, high of 71, we spent most of it traveling as this was the longest leg of the trip we’ve done so far.  The weather is supposed to start to turn cooler tomorrow.  I’m still looking forward to spending some time on the beach and having some seafood for dinner one night.

We’re watching the weather at home and hoping the snow holds off until after we make it home.  Maybe we’ll have to stay here longer than we planned!

What a beautiful day to spend on the beach, all by ourselves, well mostly by ourselves.  There were some birds, oh and dolphins!  I tried to get some pictures of the dolphins jumping but they were shy and would dive back into the water just as I would snap a picture.  While it was cooler than in Florida, it was a beautiful, relaxing day.  We continue to watch the weather at home as the storm continues to form.  We made the decision to stay at the beach until Monday, after the storm leaves.

Well, after feeling liberated at being able to make the decision to stay somewhere longer if we wanted, we got cold feet (literately) and changed our minds and actually left the beach a day early to beat the storm home.  The weather turned cold at the beach also and it was supposed to turn rainy.  The storm is now predicted to be bigger and we started to worry about the possibility of the electricity going out and the pipes freezing.  So we headed home. Mark promised to bring me back when it gets warmer, but before it gets crowded again.

We stopped for the night at Rocky Mount KOA where the temperature dropped to 28 degrees.  When we got up to get our showers, we discovered that the water hose and pressure regulator had frozen.  Luckily, we carry two hoses so Mark was able to swap the hoses out.  We defrosted the regulator in some hot water and then were back online.  As Mark was getting ready to get in the shower, I looked out the window and saw a rainbow of water spraying up in the air from our water spigot!  Turns out one of the seals blew out.  I guess we need to get two new regulators and water hookups now since we forgot one of them at the campground in GA.

After over 2800 miles in a little over two weeks, we made it home ahead of the storm!  Tudee has been winterized again until we venture out again.  Riley is happy to be back in the colder weather.